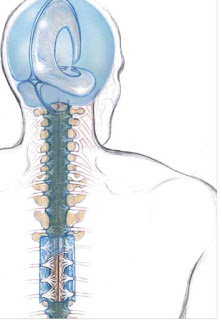 I could say that CST is a range of techniques for treating restrictions in the dural and intracranial membrane system which grew out of osteopathy, but that's just the very start of it. It's something different for every practitioner. For me it's a way of treating people which can help them to free up all levels of their health and happiness. CranioSacral Therapy is maybe not a very good name for it, maybe it should be called something like, All-Inclusive, Generally-Releasing Therapy... that'll catch on...

IT'S...
The best way to explain a bit more about CranioSacral Therapy (CST) to you is probably to tell the story of how I came to study and practise it myself - what a strange, wonderful, at times jaw-dropping journey it's been...

YOUR INNER PHYSICIAN AND YOU
Years before I ever thought of studying therapy at all, out of the blue someone lent me a copy of "Your Inner Physician and You" by Dr John Upledger. It's the story of how he came to develop CranioSacral Therapy following an observation he made while assisting during a spinal operation. He found that he couldn't hold the patient's dural tube still, it had a rhythmic movement all of its own. It was a fascinating read but it just stayed in the back of my mind for a while.
Back then, I had my own furniture and kitchen business and had very debilitating health problems in the form of back pain, sciatica and grim headache/migraine/trigeminal neuralgia. Fellow sufferers will tell you that these are problems that aren't well dealt with by the NHS, though it's wonderful in many other ways. I tried various different complimentary therapies with better results. This included CST, but it wasn't then the treatment so much as the clinic that got me interested. I'd been for several treatments, mostly acupuncture, at the Centre for Natural Health at it's old home in Bridgend, Perth, run by John Page and Carol Houston. It was professional but friendly at the same time, in contrast to some of the other places where I'd had treatment which were sometimes pretty dreadful, and it gave me the idea to set up a clinic of my own.
Then I thought that if I was going to do that I might as well study a therapy myself, thinking of Reflexology at the time. I phoned Carol Houston for her advice and she recommended a course in massage as a good foundation for anything else. It was 1997 when I started my massage studies with the brilliant Eddie and Corinne Bryce in Dunfermline. After qualifying, I asked John and Carol if I could practice with them at the Centre. Part of the arrangement for all practitioners working there was that they study CST, so that's how I came to do the first level course. It was fascinating and eye-opening but the magic didn't really kick in until later...

THERAPY - ENERGY WORK FOR ALL

Ian Watt
United Kingdom
I'm a woodworker, therapist and general eco adventurer. Since a wake-up moment in 2006, I've been actively exploring what a sustainable way of life might look like, visiting and helping out on eco-projects, small holdings, hill farms and community gardens here in the UK and in Portugal. It's been a fascinating time - read all about it in my various blogs via the links. I've come to agree more and more with Permaculture teacher Geoff Lawton's great saying, "You can solve all the world's problems.... in a garden!"